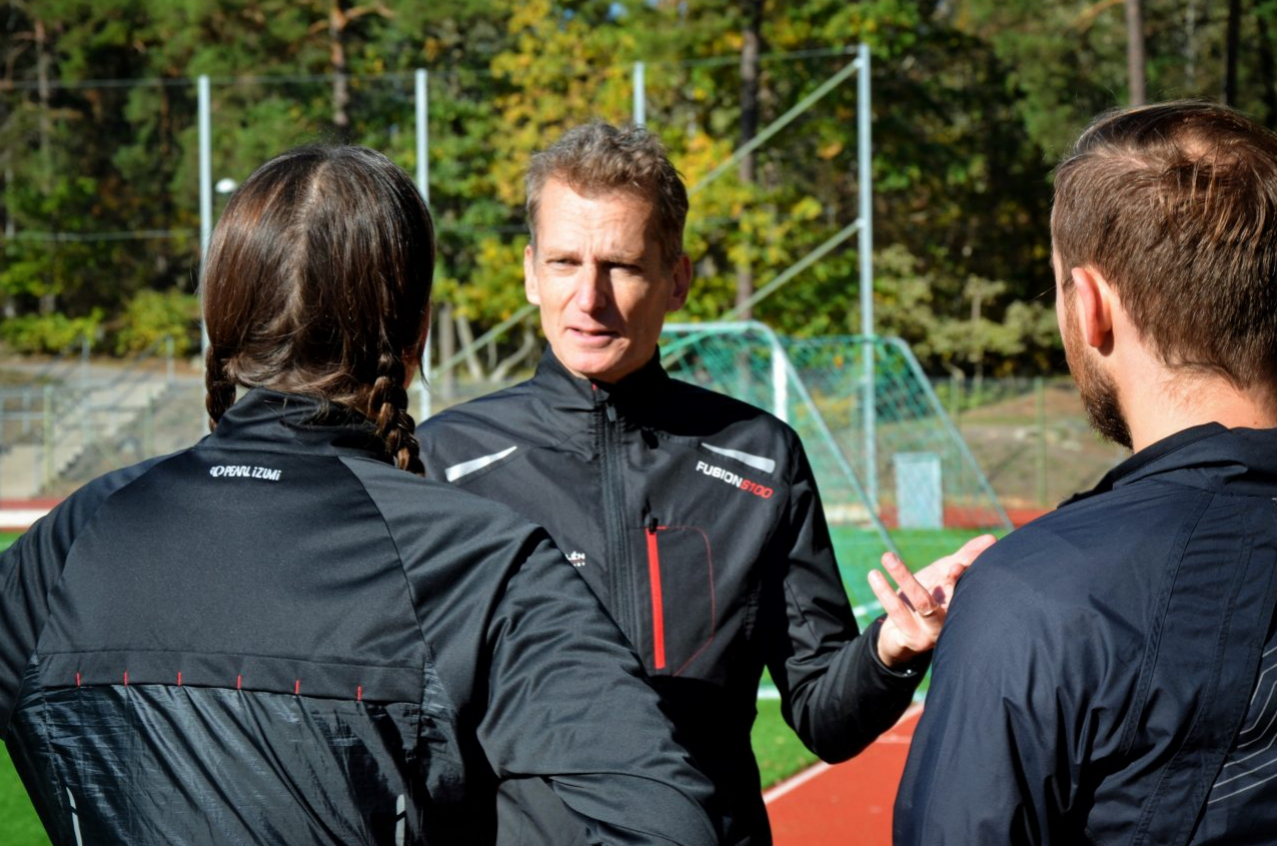 All quotes are copied from emails, text messages, etc.

Testimonials about the online course

”Today I ran I with audio lesson no. 2 from your online course. Increased the pace from 6:30 to 5:30/km (10.27 to 8.50/mile) without it feeling more strenuous. On the contrary actually.”
Runner writing an email on how the course is going

"I was really skeptical about the online course. Thought it couldn't possibly work if you don't see me. But then it was like magic. Like you saw me and saw exactly what I was doing and what happened when I followed the instructions."
Runner

”The course is fantastic! Fun, developing and Fredrik is an educator from another planet!”
Runner contact me spontaneously to thank me for the course

”Thank you for your awesome online course on running technique. Very educational and useful, above all simple tools to work with. Both for myself as a runner and, above all, in running technique analyzes of my clients/patients!!”
Osteopath and runner

”Very rewarding. Many "aha moments". And what a good timing you have in your comments in the audio lessons, it was as if you were right next to me. I can say that there is a BIG difference between before and after the lesson. I will recommend your course to all runners I know!”
Mail from a runner after the first of the six audio lessons

"I can really recommend the course. Small simple tricks that make a big difference"
Runners comment on the course on Instagram

”I have struggled with an ITB syndrome for several years. Went to many physiotherapists, had online personal trainers, ran on gravel roads, paths, asphalt and tested different shoes. Nothing has helped. Did rehab with all sorts of different exercises and most recently I was told that it is probably surgery that applies to make me run without pain again. Bought your online course and thought it would probably be the same result as with everything else I have tried over the years. BUT now I almost always run without pain. Ran 7 kilometer (4,35 miles) last week without pain. Thank you, Thank you, Thank you for this course. Never thought an online course could be this good. Now I start again in lesson no. 1. A joy to run with you in my ears.”
Runner in a thank you email

”I have done the first two audio lessons now. It's amazing what a difference you made for me. I ran 90 minutes yesterday and have never felt so refreshed both during and after the workout, and then I have never run so fast with the same low heart rate. Thanks for that!!”
Update from a runner after two of the six audio lessons

”Today I tied everything together and I felt "What the hell !? How is this possible?". I am convinced that you have been an apprentice to a witch doctor in deepest Africa. There is no other reasonable explanation, because it can be impossible that if you tie everything together, the whole running technique changes completely. Only black magic can solve that. I immediately felt that my lower legs no longer felt sore. I also wanted to run more. In the past, I have reluctantly done so solely out of sheer stubbornness.”
The idea of the course is that everything should feel like a single movement that comes by itself. Not a hundred things to keep track of. Something this runner discovered and also found that his Garmin watch announces sudden performance improvements

”Thank you for a pedagogical, effective and (this should not be underestimated) fun course.”
Runner

”I have done the first part of the online course and been out running with the first audio lesson with Zillén in my headphones. Incredible feeling. All of a sudden I found a gear I did not know I had. As if a turbo was turned on. And I have probably never or rarely come across such pedagogical instructions. Even though I have worked as a teacher for 25 years (Teacher educator, take lessons). How easy to follow. I was honestly also a bit skeptical before but all those prejudices came to shame right away. In addition, Fredrik is f ***** g funny, as the icing on the cake.”
Online course participants in a comment on Instagram

”I must admit that I was quite hesitant about how effective an online course could be. But I have learned a lot. Without being in as good shape as before, I managed to touch my PB of 10 kilometers. A real difference to run in less than 40 minutes with this running technique.”
Satisfied runner

"Tonight I did audio lesson 2 from your online course. There are so many "aha moments" so far. My "usual" running stride feels like I'm sitting heavily in an armchair, now after what I learned from you, I feel like I'm flying forward."
Online course participants in a comment on Instagram

“I have now come to the first audio lesson. I just have to say that it is extremely exciting and clear how the whole course is structured. Very entertaining and everything feels so obvious. Looking forward to going on a new run tonight with you in my headphones!"
Message on Instagram

"I'm halfway through the course and have to write and thank you for the results I got. I have previously been unbalanced with 47% - 53% in ground contact time and always wondered how to overcome this which generated in running injuries on one side of my body. After following your instructions this has changed significantly. Now the average is 49% - 51%. Last session which was a bit harder, 12 km, I was at about 50-50% the first 6 km and only then the margin of error started to come. I just want to say thank you. It will be really fun to continue the course.  You are awesome."
Online course participant

”A picture of me and the living running sculptor Fredrik Zillén. Can only agree with the tribute choir of this imaginative genius who with passion and rare detail has an ability to find alternatives to more efficient running”.
Caption on Instagram signed national team runner David Nilsson who 1,5 months later broke the 36-year-old Swedish record in marathons with his 2:10:08.

“Improved my time by 20 seconds per kilometer without increasing my heart rate when I tested my new running technique yesterday at 10 k! Crazy. Many thanks!"
First session after a private course

”On the long run last Saturday, 23 km, I had about 20 seconds/km faster average pace than usual."
Runner after a running technique analysis

"I can not help but be impressed and agree with the tribute choir to RW's running technique guru, Fredrik Zillén. He really has the knowledge & ability to both see, explain and take your running further ”.
Anders Szalkai, winner of the Stockholm Marathon, participant World Championships, editor-in-chief of Runner’s World Sweden

“I have had chronic shin splints for several years and have not been able to run more than twice a week. Now I feel no pain at all”.
Fredrik F, two weeks after the course "

"Fredrik is a magician. That's all I need to say."
Runner after a running technique analysis

"Coming in rested after a 16.5 km run felt strange. I ran 20 sec/km faster on average at exactly the same heart rate as usual in my long runs. Forever grateful!" Alberto, less than a day after a group course

“We did not focus so much on getting faster, but more on getting free from my ITB syndrome. I have been suffering from the injury for about 4 years. It was strange, but amazing that I ran painlessly!”
A runner who after four years of pain ran with a smile a marathon completely without knee pain two weeks after a meeting with Fredrik Zillén

”Has got a real re-ignition with the running. The average time / km has decreased by 1 minute! Had an average tempo of 6.10 now 5.08! Did not feel anything in either thighs, shins or calves.”
Course participant Ulf

”I have met many running coaches and also cross-country ski coaches in my life. But I have never learned so much as when I was with you”.
Runner after a group course

"You are a genius!"
Runner after a running technique analysis

"I ran right away when I got home and was 15-20s/km faster with the same heart rate on my 5 km lap."
Participants in the group course

“Incredibly good! Fredrik is unique and can with incredible precision and pedagogical guidance guide you to a better, more efficient and gentler way of running.”
Runner after a running technique analysis

“The pace of the training sessions increased significantly from about 5.50 tempo to about 4.40-4.50. The body feels incredibly much lighter and it feels like you are flying forward.”
Private course participants

“Damn you were good! Thank you so much for these simple but ingenious instructions. What a difference. What if I met you when I was 20.”
Peter after a private course

"When you taught me to rotate the hip, the knee problems disappeared immediately"
Runner after a running technique analysis

"The feelings of injury have miraculously disappeared after two running sessions with a focus on changed running technique."
Participants after a group course

"Absolutely unbelievably good experience! Fredrik is such a mega-professional"
Runner after a running technique analysis

"Clearly faster then, also with a couple of beats lower in heart rate."
Runners who after a private course compared kilometer times and heart rate with the same distance the week before the course

“A really holy s..h moment t moment /… / I usually run at 162 beats per minute but now I was steady at 157 with some peaks at 158. Such a nice feeling that I increased my speed without my heart rate going up more than 1 beat. There are usually quite a few beats for me otherwise.”
Runner after a running technique analysis

“Insanely inspiring visit to @fredrikzillen this morning. With a clear pedagogy and a brilliant eye for detail, he gave me the keys to a more efficient and relaxed running technique. You can almost believe that he is doing witchcraft.”
Runner after a running technique analysis

“Thank you for a fantastic course this Friday with incredibly accurate instructions! It was also among the best I have experienced in teaching throughout my life.”
Runners aged 70+ after a private course

“Ran 10k on my personal best with plenty of energy left when I reached the finish line. It felt like finding a hidden energy reserve.”
Runner after a running technique analysis

”Zillén is the best in Sweden at teaching running technique. That's just how it is.”
Participants in triathlon training camp in anonymous survey after the trip

“Without having to work so hard, I cut almost 30 seconds per kilometer. What a difference some adjustments can make. :-)”
Runner the week after a private course

"Another unreal, rewarding and inspiring meeting with the running magician @fredrikzillen"
Runners after a running technique analysis

“After the course, I ran and had a 30 sec lower average pace compared to a session on the same distance I ran a few weeks earlier. At the same time, my Garmin showed that the "training effect" dropped from 4.2 to 3.7. I thus seem to have run faster but made less effort”.
Fredrik J, after a small group engineering course

"When I run as usual, I have pain in my knee. When I run the way you want, I feel no pain at all. It's absolutely magical”.
64-year-old triathlete whose doctor completely ruled out his chances of running again due to pain from osteoarthritis

“1. I have been able to double (literally) running distance / month without any problems. 2. On average, the heart rate has dropped remarkably. 3. I have no pain in my shins, knees or Achilles tendon, like I have had before.”
Course participants